Get the latest on our COVID-19 response

Hyperloop & A Stockpile of Beer

Hyperloop & A Stockpile of Beer

If you’re Elon Musk, your New Year’s resolution for 2016 is short and sweet: Build the Hyperloop. Or at least an 8-km test track.
spectrum.ieee.org/transportation/mass-transit/elon-musks-hyperloop-proposal-gains-momentum

Do you ever find yourself struggling to recall something you read recently? Age may not be the culprit. A recent study suggests that humans retain less of the information that we absorb via electronic devices than from, say, an actual book. (Maryanne Wolf, Jersey City, Oct 2013)
www.scientificamerican.com/article/reading-paper-screens/

But we may not need memory augmentation (Sunil Vemuri, Jim Gemmell, Salt Lake City, Dec 2009) as much as we thought: The human capacity for memory is 10x what it was previously thought to be.
neurosciencenews.com/memory-capacity-hippocampus-3469/

We are not fans of monocultures, so we were distressed to read recent warnings that the blockchain—meant to be the most diversified of all disparate verified communication systems—is, at least in Bitcoin, vulnerable by its very lack of variousness. (Vitalik Buterin, Philadelphia, Jul 2015; John Henry Clippinger, Atlanta, Feb 2014)
tonyarcieri.com/on-the-dangers-of-a-blockchain-monoculture

At this year’s Davos meeting, the World Economic Forum issued the latest in what seems to be an endless parade of robots-are-killing-jobs reports (Erik Nieves, Detroit, May 2015; Andrew McAfee, Jersey City, Oct 2013). Ho hum. But this one is a bit different—it forecasts not only a net loss of 5 million (7.1 million, offset by 2 million new jobs) but that the jobs most at risk of being replaced by machines are those in “administrative and routine white-collar office functions” led by losses in healthcare, energy, and financial services.
www.weforum.org/press/2016/01/five-million-jobs-by-2020-the-real-challenge-of-the-fourth-industrial-revolution

And UBS released a report at Davos that adds another prediction: Robots and intelligent software will bring about a further rise in income inequality. In an interesting, um, coincidence, “the Swiss bank concludes that Switzerland is the country best-placed to adapt to the new robot world.”

Speaking of taking the world—or at least the east coast of the U.S.— by storm, Jonas is coming. Weather forecasting is getting better (Anne Miglarese, Vienna, July 2013), but it’s still an imprecise science. A friend sent this helpful preparation planning chart: 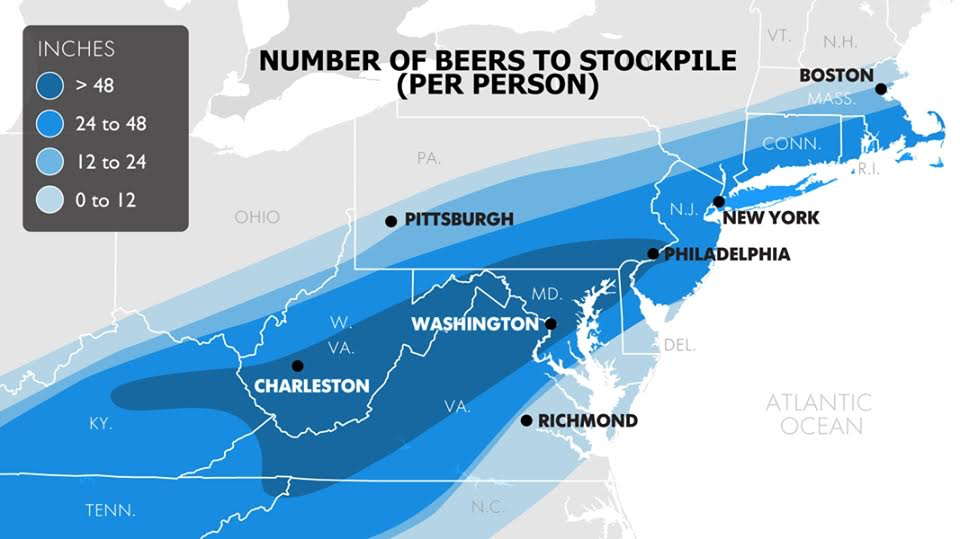 Institutional Investor is committed to the health and safety of our participants at our events. The Events Shield, established in accordance with our parent company, Euromoney, adds a further layer of best practice standards and guidelines, which will be applied across all of our events. Below is a highlight of our protocol for event safety.

Events will maintain a maximum capacity and density of participants will be set up in such a way to allow physical distancing.

At all of our events, we will work with the venue to ensure we maintain the highest standards of hygiene and cleanliness.

Our event teams will communicate our health and safety standards, procedures and event guidance clearly to all attendees before the start of the event.

To keep you safe, we’ll need to ensure all our participants, partners and staff follow the Events Shield and local procedures and protocols.